What a crazy day.

On Saturday morning, I walked out the door just after 4:30AM to take out the dogs. It had not cooled down overnight, temps remained in the 70s. That meant I’d have to go out faster than preferred to get ahead of the mid-day heat.

Joe Edwards from the Fire Company picked me up at 5:15AM sharp and we had a relatively uneventful one mile trip down to the fire house.

There was a cheery group at the firehouse, both members of the fire company and police officers on their 7PM to 7AM shift. Trucks were out of their bays and it was a wonderful sight to start the day.

In the blink of an eye sunrise (5:37AM) was officially upon us and it was time to run.

I was expecting to be solo on the road at the outset of the run. But the fire company provided me with a companion who ended up being my guardian angel for the run – Greg Kohlmaier.

Greg initially presented his companionship as passive. He would be out of the way, quietly monitoring the run. Greg is a former ironman triathlete, well aware of the mental and physical trials required of endurance.

In turned out that we had much to discuss. Greg and I became partners in an adventure for the first half of the course. And we both had our ups & downs throughout the day.

First stop was Thorndale Fire Company. The morning was beautiful.

My mom drove by shortly after Thorndale. She was intent on seeing me through Coatesville, leap-frogging my path. She also provided history lessons! Any building with local or family history came with it a quick story from my mom 🙂

We headed through Coatesville to Westwood Fire Company.

A community garden in Coatesville.

A remarkable number of ducks on a small waterway.

I was taking salt pills (S-Caps) up to twice per hour, eating Gu & fruit snacks every hour and drinking water constantly. 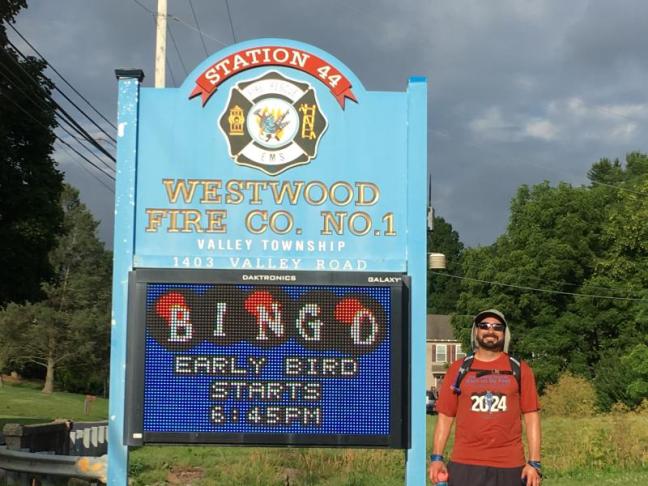 Stopping at Westwood for a bit, I had a granola bar, important to satisfy hunger.

My mom had given me several bottles of water which I was trying to balance with keeping my CamelBak hydration pack full. The weight of the pack was a compromise.

Greg and I continued to Honey Brook. On paper, it is a delightful half marathon. In reality, it is about as difficult a course elevation profile as you could design in our area.

Some of the moments during the route blend together. I was unfamiliar with many of the roads. EBFC had a vehicle and volunteers checking on Greg and I – and they so graciously brought us water – COLD water!

Greg and I stopped at two more fire stations in quick succession – Keystone Valley in Pomeroy and Sadsburyville. 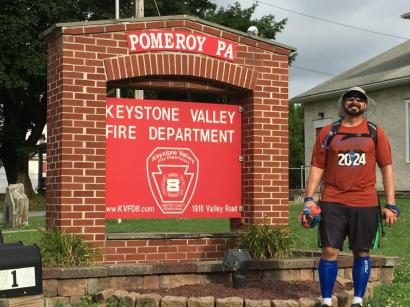 Leaving Sadsburyville began the toughest part of the day. Hills upon hills and heat/humidity that made hydration very difficult.

We did fall off course briefly, deep in conversation. I had a feeling we had run further than my cue cards instructed, confirmed with GPS and Greg doubled back and waved me to make a U turn. Back on course – jogging down the hills and grinding back up them – it was slow going.

Before long we were at Honey Brook Fire Company where we were greeted by members. 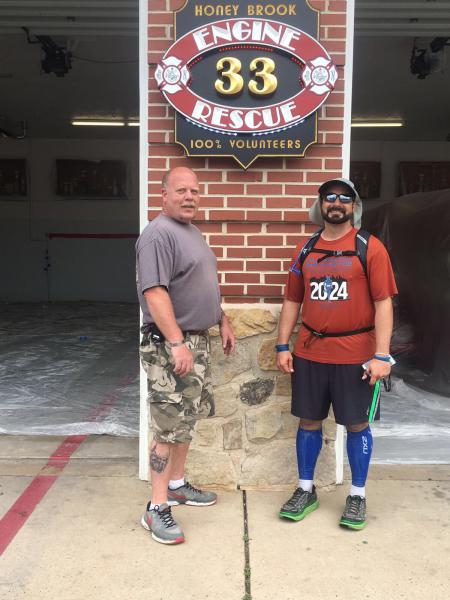 My wife also met me there to provide a change of socks. My socks were soaked from sweat all day – complicated by my compression socks which provide support for my calves but also cause my legs to sweat more.

After Honey Brook Fire Company, we stopped at the Turkey Hill to get some fuel for the 2nd half of the run. Greg’s biking shoe was stuck to his pedal so into Turkey Hill he went – bike and all! At this point, my Dad surprised me by joining us on his bike. 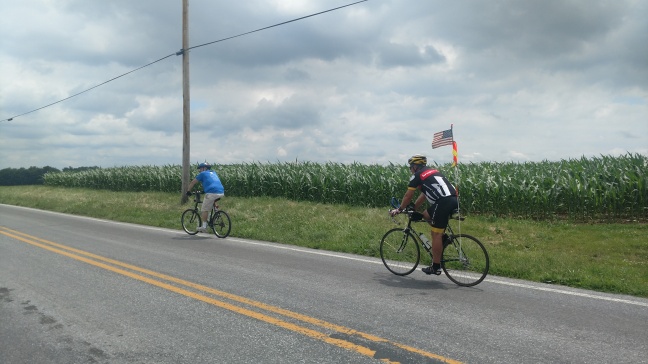 My mom brought gatorade, water and fresh watermelon – which I had been craving after running by a few fruit & veggie stands along Route 10. My mom would then leap frog us in her car for the remainder of the run.

At this point, the heat had defeated me. My pace was SUPER SLOW. Even the local farm animals took pity on me.

I knew that I just had to make it to Glenmoore to be joined by my friend Ted. Because it was taking me so long, Ted and his wife actually found me slogging up a huge hill and reinvigorated my run with some cold Gatorade! Also along this part of the route, my friend Suzanne had setup a strategically placed cooler with food, beverages and fresh fruit. That was great!

Finally, I arrived at Glenmoore Fire Company, greeting by a big crowd. Wow!

And I all wanted to do was sit down and eat – and take more salt pills.

Glenmoore’s FC’s chief Mike King really tempted me, noting that I could do a much easier run for Glenmoore because they are station 48! 🙂

Onto Ludwig’s corner, which must be at the top of a mountain. I was now fully accompanied by Greg & my Dad on bikes and Ted on foot. This wasn’t much fun for the cyclists because I had to walk up so many hills and was struggling to stay hydrated whenever I ran. Just a mile or so from Ludwig’s corner I was again surprised – this time by EBFC Deputy Chief Joe Edwards who was jumping on his bike, too!

The crew at Ludwig’s Fire Company opened up their doors and we did a photo op.

My wife also met us again so that I could trade in my socks and shirt. There’s nothing quite like a dry shirt and dry pair of socks. And then the skies opened up.

We had seen it building – a really big thunderstorm. And I was asked to briefly entertain the idea of abandoning the effort in the name of safety. But I couldn’t afford to stop – the clock was ticking and I had about 4 hours to fit in the final 12 miles. So off we went!

Ted and I took off at a good clip – knowing that the entire route to the next stop at Minquas would be downhill. The storm actually aided my run. Humidity dropped. I was able to stay hydrated. And running in the rain is fun!

Well – the fun quickly ended. Running into Eagle meant more hills – all the way up to Shamona Creek. It was here that Greg’s stuck bike shoe caused more trouble because his bike dropped while riding up the steepest hill. And Greg dropped with it. We sprang into action – Joe biked ahead to assess Greg’s condition – he was OK. Ted grabbed Greg’s bike and carried it up the hill. Greg pushed up the hill in his sock.

This scene delivered my favorite photo of the day. 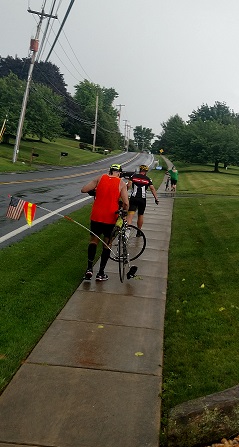 Thankfully the top of that hill meant more downhill running and found us on the Struble Trail where Ted’s wife & daughter were faithfully cheering for us. Up ahead at Minquas I took another break ahead of the final 4 mile push back to home base at EBFC. Ted headed home. Joe jumped in a truck and went back to the firehouse. Greg pushed ahead on his bike and I was given another surprise. 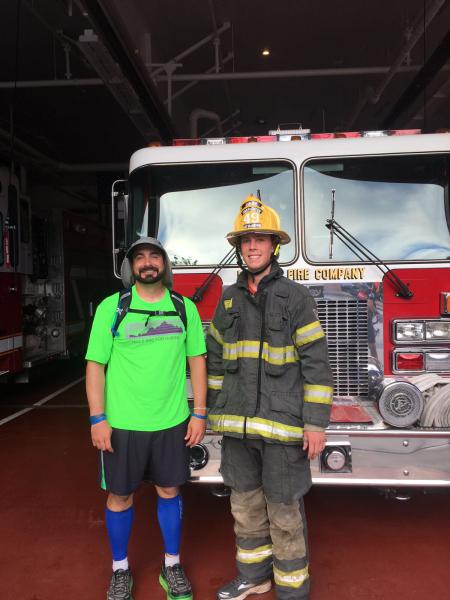 A young volunteer firefighter Nate, in full gear, was joining me for the final 4 miles. And so we went down Pennsylvanie Ave over to 322. I noted that there wouldn’t be much running because my feet were too beat up – mostly blisters from being soaking wet all day. 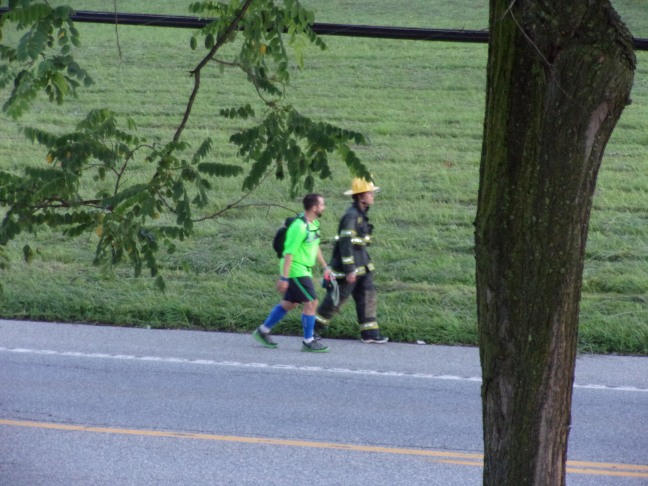 With about half a mile to go – Joe Edwards told Nate and I to work our way off of the shoulder and onto Rt 322. They had the final, best surprise of the day in store.

Within moments we found ourselves escorted by police cars into Guthriesville where fire trucks then entered the road from Village Hardware and it was an awesome parade back to the firehouse! 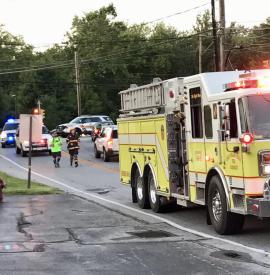 There was a very nice finish line chute setup and just like that I crossed the line ahead of my self-imposed sunset deadline!

There I was greeted by family and friends.

And a Facebook Live video stream. Among my family – my daughter greeted me on an iPad via Facetime and then I gave high-fives and hugs to everyone at the firehouse. What a way to end an awesome day.

Photo of Greg and I:

To wrap up the night – we took a bunch of photos and thanked everyone.

And then the fire company sent me home with two huge buckets of ice which I put to good use!

Well, you have to take advantage of the longest days of the year. I did several runs at dusk last week including a 6-miler without a headlamp, the route illuminated only by lightning bugs (and passing cars).

Sunday the 25th, I participated in the Challenge for Cancer 30-mile bike ride in West Chester. It was a fun, friendly ride.

I had off from work during the week so I was able to get in plenty of runs and cross training workouts.

I was only able to do a 10 mile run on Saturday because our weekend was otherwise full of soccer. That run led me to the photo above – a trail to nowhere.

I was sick for the entire week which was annoying.

Super hot and humid but it was fun.

On Saturday, June 10th I did another 5 mile run which was shorter than hoped but all I could fit in.

Ticks are bad this year.

Sunday, June 4th – 6.5 miles to my softball game. We had a come-from-behind win! 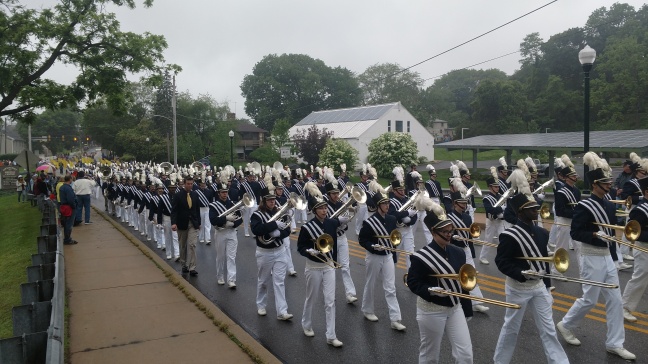 Saturday, too busy – only 1.5 miles in the evening.

Sunday – Annual “IBX Downingtown 10-miler” aka – running 10 miles from my front door to Cracker Barrel. I couldn’t remember the correct course so it was only 9 miles and change. The previous 2 years, it was 11 miles so it evens out 🙂

Memorial Day Monday – 5 miles into town for the Memorial Day Parade & Ceremony. Then 1.5 to Chick-Fil-A (where they did not have Buy One Get One Free milkshakes).

On Saturday, May 20th – I crashed my bike riding to the Fallen Heroes 5K at Hibernia Park but still ran the 5K (2nd in age group, small crowd).

On Sunday, May 21st – I ran the Chester County Half Marathon, running to-and-from the race as well. 27 miles on the day. Nearly finished last in the Half @ 2h30min